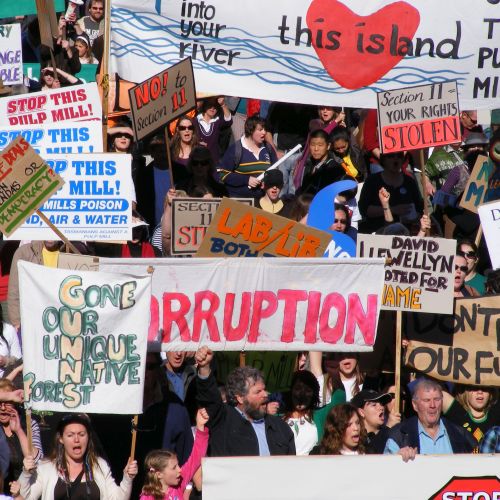 Volunteering on an information stall for ABC Friends at Exeter Market yesterday proved to be a lot more beneficial than simply flying the flag for our public broadcaster, worthwhile though that also certainly proved to be.

During the course of the morning while chatting to a couple of guys about why whoever wins government in this year’s federal election should ensure restoring ABC’s funding is a priority, I had the nagging feeling I knew one of them. The question was from where? I was 90 per cent sure it was from the pulp mill campaign, but a fair amount of water has flowed under the bridge since then and we’re all several years older. Interestingly though, it turned out he was also racking his brains for exactly the same reason.

As the conversation wrapped up about the importance of the ABC’s role in ensuring we have a healthy democracy, and a public broadcaster free from political interference that’s able to hold all politicians and governments to account, I decided to ask him if he was who, by then, I was almost certain I thought he was. And indeed he was.

Needless to say once our respective identities had been confirmed reminiscences ensured the conversation continued for several more minutes, but the revelations that followed were pure gold so far as I was concerned. Everyone who chose to campaign against the mill did so for a variety of personal reasons but I’d never known what had drawn Rod into the fight. I do now though and what he told me was a shocking litany of Gunns’, and the government’s, perfidy.
It also included details that not only confirmed what I’ve literally just written about in my early and far-from-finished draft, but also included a lot more detail. And shocking, damning detail at that in respect of Gunns and the company’s appalling aerial spraying practices.

It was all eye-popping stuff, so having confirmed the email address that still lurks in my address book is current, and that Rod is happy to be quoted I shall now need to revisit and rewrite some of the passages I thought were complete. But I’ll be doing so more confidently, and in the knowledge I can tap into his own experiences of the kind of truly shocking forestry practices that were standard for Gunns during those early days of the pulp mill campaign. A time when it seemed to many that it called the government’s tune, and essentially ruled the state. These were also practices that confirmed Gunns, and some of its employees, were quite prepared to disregard both the health and safety of people, and the environment more broadly. It seemed campaigning to stop the pulp mill had inadvertently uncovered a can of very nasty worms.