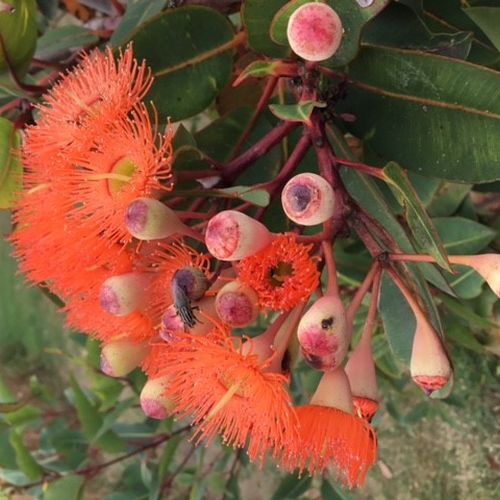 Not just red, but pink, peach – and orange!

Red flowering eucalypts are renowned for their colour range, and our garden can almost boast the full palette, especially now John has successfully nurtured a stunning orange-flowering variety from seed collected from Bruny Island. 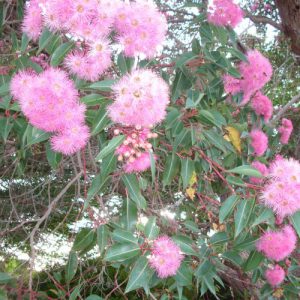 We spotted the tree in full flower while on our way back to the car after an exhilarating Pennicott tour experience about three years ago spotting seals, whales, seabirds and the ancient dolorite rock formation that is characteristic of so much of Tasmania’s south-west. The voucher for this trip had been won on a silent auction fundraiser to support the victims of an earthquake in Nepal some months previously, and we had only weeks to use it before it expired. 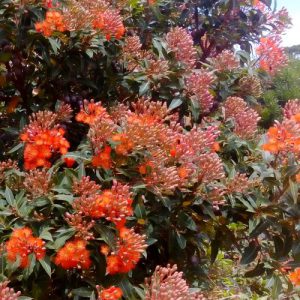 The tree was in someone’s garden, and close to the fence but as nobody seemed to be around, and the gate was open, it was a matter of moments to briefly trespass in order to quickly search for some seed pods that hadn’t already split and spilt their seed. I took several photos – but all were lost unfortunately when the phone died before I had transferred them all to the computer. A sharp reminder that a regular regime for back-ups and downloads really does need to be maintained and adhered to.

We had no idea if the seed would be viable, but John studied the books, checked what germination method was needed and worked his green-fingered magic, and in due course tiny green shoots were visible in three or four pots. Sadly, some later died during that winter. We were away for several weeks and our house-sitter failed to water them, or forgot to water them, leaving us with just two fragile seedlings one of which looked seriously unwell.

Both survived though and were re-potted until they eventually grew to the point where they could be transferred from pots to ground. Despite flowering for the first time this year, the least healthy tree really shouldn’t be in flower at all as it’s still too young. An indication it’s struggling perhaps, but at least we know that the flowers will be the same colour as its parent – that rich and vibrant orange we were so stunned by on Bruny. The bees absolutely love them!

As for the other tree, it’s taller and looks much healthier, but there’s no sign of a flower. Next year though the story is likely to be quite different.