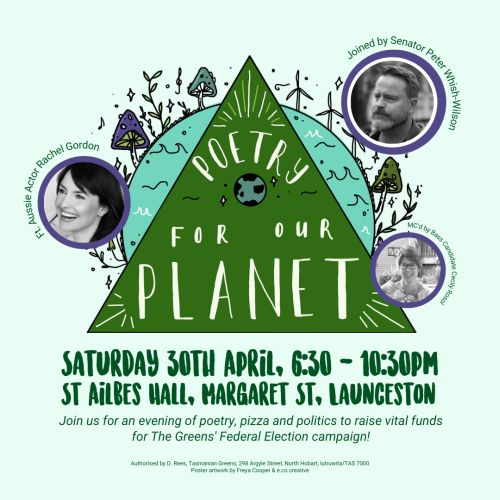 Voting for our future

Despite the best of intentions to keep this blog a political-free zone, I’ve decided it’s not possible. And not just because there’s a federal election in four weeks. Possibly the most important one ever, and one that could just deliver a result able to bring us back from the climate change brink, or else send us spiralling into a frightening future from which there will be no safe return.

It’s no great secret I support the Greens. I joined the party in the early years of the pulp mill campaign, as did Peter Whish-Wilson, who is now an Australian Greens senator and up for re-election. I first got to know Pete when we were both founder members of community group Friends of the Tamar Valley, and he was one of several FTV members, (including me) who stood as support candidates for the Greens either in state or federal elections.

Pete epitomises that saying about a person who ‘grows into the job’. He’s certainly done so since first entering the Senate in 2012, following the sudden and surprise retirement of Bob Brown. Big shoes indeed, but Pete’s filled them fabulously, fighting for our forests, our oceans, our state and our planet for 10 years.

He sees this election as the climate election. So do I. We are literally fighting, politically speaking, for a habitable future on the planet. This election is crunch time for Australia in my opinion, and I’m proud to be doing as much as possible to achieve not just Pete’s re-election, but the dismissal of a blind and blinkered federal Liberal/National government that refuses to divorce itself from its toxic relationship with the fossil fuel industry. This industry has contributed massively to creating the climate extremes Australia has experienced to the hilt of late. Whether it’s bushfires, drought, or floods, we’ve copped the lot and the damage to lives, to homes, communities, to agriculture and the economy more broadly has been immense. And all the signs point to all these climate-induced extremes getting worse if we do nothing. Yet Scott Morrison’s Coalition government remains complacent despite overwhelming scientific and economic evidence that says the result of inaction will be environmentally, socially and economically disastrous. 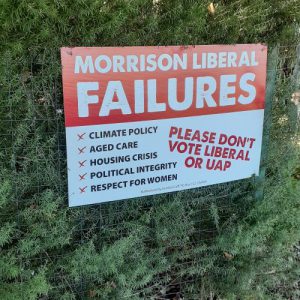 The nation’s youth are screaming too – a demographic that so far has been overlooked in this campaign. That over 700,000 first-time voters registered with the AEC on the last day before the books closed, was apparently unprecedented. Most of those are probably young people determined to have their voices heard, and an opportunity to vote for candidates who are demanding action on climate change.

A fundraiser supporting Pete’s re-election campaign is on next Saturday. Poetry for the Planet, with several slices of pizza thrown in, as well as some motivational words from the man himself. I’m one of the approximately 12 poets invited to share their words about climate change, and the environment. I’m told tickets are selling well, and that’s good. I’m also told that support for the Greens has been rising rapidly in the last few weeks. Not that you’d hear about it in the mainstream media since the focus has been almost exclusively on Liberals and Labor.

I’m hoping the Greens will be the quiet achievers on the 21st May, and will be a vibrant and visionary force in the next parliament. They’re certainly the only ones with a realistic plan to transition the country forward.