As the count staggered to its conclusion last week I continued to be totally overwhelmed and bewildered by my personal vote (2432 in case you were wondering) but remain gutted that it wasn’t enough – along with the impressive vote numbers for the other support candidates – to get Jack over the line and elected as Greens MP for Bass. Surely next time . . . ? 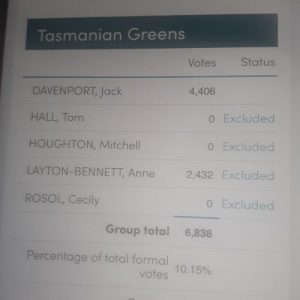 A genuine surprise, as the result inched its way to the finish line, was receiving an email from a former housemate from decades ago when we were both living and working, (studying in Bob’s case) and sharing a house in Perth with two others. As one did back in the day.

While he was travelling interstate with Sue, his wife, and doing the grey nomad thing he decided to see how the Tasmanian election was going. He’s an ex-pat Tasmanian who’s lived in Canberra for ages but still keeps a weather eye on what’s happening in the state of his birth. He noticed my name on the ticket, and as one all too easily can these days, found my contact details using the Google option and sent a lengthy email to say G’day. Although never the most reliable correspondent since our Perth days, now contact has been re-established it will hopefully continue. He may even visit. After all, barring New Zealand, Tasmania is the closest anyone from the mainland can get to an overseas trip for the forseeable future!

There was also the unexpected email from a former work colleague, who retired several years before I did. David was one of the school’s outside support staff and earned my undying gratitude by going out of his way in my first year at the school to ensure I had a key to access the school pool during the summer holidays – the only time staff were allowed to use it. He sent one of the dreaded template pre-election emails from one of the many organisations who encouraged their supporters to seek the position of candidates on whichever issue was front of mind for them. Rightly or wrongly I deviated slightly from the drafted response, and personalised my reply. The reward was receiving a lovely response in return. A man who’s heart is definitely in the right place when it comes to protecting Tasmania’s natural environment.

So there were a few advantages to putting up my hand for this gig, even if it is absolutely and positively the last time I do so!