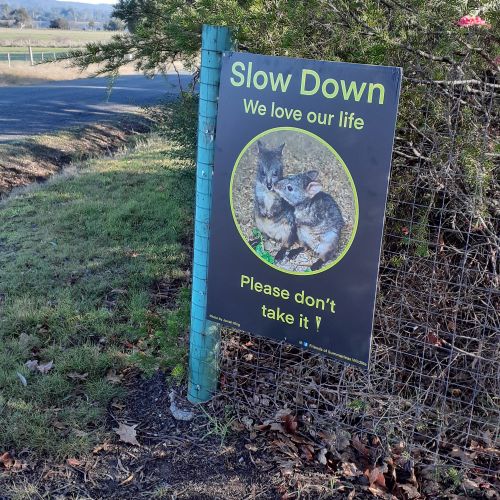 Have we reached a tipping point I wonder, in a realisation and an awareness – as well as hopefully a collective horror – about the staggering number of wildlife being exterminated on our roads?
It’s not like the issue of roadkill is new. Some of us have been urging drivers to slow down on Tasmania’s roads for years, especially between the hours of dusk and dawn when our mostly nocturnal wildlife is active. There have been multiple letters to editors over the years, from both locals and tourists, appalled at the number of roadkilled bodies lining the roadsides. There have been multiple pleas from wildlife champion Greg Irons from Bonorong Wildlife Sanctuary, begging people to please show caution, and to slow down, especially when driving at night or early in the morning.

It seems that people are finally waking up and finding their voices. Certainly I hope so. Suddenly there seems to be an explosion of community groups forming around the state determined to halt the carnage. Primarily in their own locality, but also more widely. Facebook pages have been established. Tamar Valley Wildlife Roadkill Initiative and Friends of Summerleas Wildlife are just two of them. Posts are being shared. The ‘likes’ are increasing. While the graphic photos being posted can be confronting, (they’re meant to be) they are also having some success in mobilising people to be more aware. And to encourage them how to be involved.

Letters to editors are good, and Council road signs reminding drivers to ‘slow down for wildlife’ are also good, but a relatively new and effective strategy being promoted by a southern Tasmanian group is posters. They have a range of different ones to choose from and they’re popping up on fences and gates across the island. Thanks to a committed team of volunteers and wildlife carers these posters are being ferried around the state. They all have a photograph of a pademelon, a wallaby, a wombat, a masked owl, a Tasmanian devil etc and a simple message that asks drivers to slow down because everyone deserves to arrive home safe and sound at night. And the cost is modest at only $16 each. Order from Friends of Summerleas Wildlife

It’s a fantastic initiative and already there are three along our road. It’s certainly not the only strategy to help protect our vulnerable wildlife, and I cannot say in truth that it’s proved 100 per cent effective yet in my area, but it’s a start and will hopefully prompt more people to be alert to our furred and feathered friends when they’re driving along regional and rural roads, because as the posters remind us: we all deserve to arrive home safely.