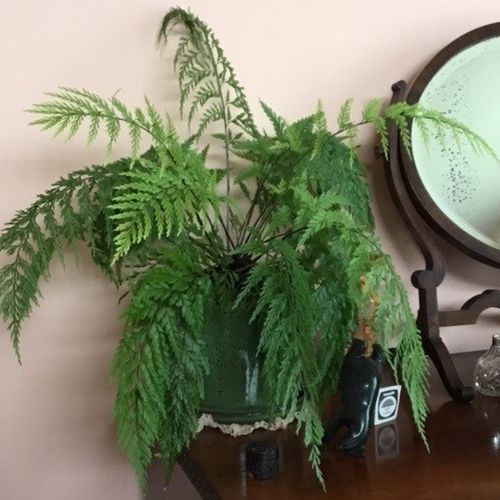 I’m rather proud of this fern, which is a daughter of a plant I’ve had since our florist shop/flower growing years so we’re talking a decade or two really. The mother plant was at death’s door for a while. No idea why – and still don’t – but while there seemed to be a spark of life I kept on nurturing her and she finally rewarded me by recovering. Oh, the power of never giving up!

Now she’d found her mojo mother fern kept on thriving and over time she outgrew several pots. She is now very mature and is in the largest pot I could find that doesn’t weigh a ton and which still looks OK indoors rather than outside, but I’m running out of house room to display her in a manner to which her venerable age deserves. However she isn’t called a hen and chicken fern for nothing, but it took a while before I had a crack at propagating some of those ‘babies’ bursting forth along her fronds. I tend to leave that sort of thing to the resident green fingered plant guru, who is a master at growing plants from seeds or cuttings. Particularly if it’s an Australian native plant – his own special passion and about which he’s now hugely knowledgeable. But I checked out some of our growing library of plant books and followed the instructions, then held my breath. Eventually five little ferns all took – four of which have subsequently gone to other homes and are hopefully still thriving. I know at least two of them are.

The fourth is also thriving, and has been re-potted twice, but this one is of a later batch and currently has pride of place in the bedroom. She is also producing ‘babies’ so as we head towards spring it could be time to start the maternity ward up again in the potting shed. Then I’ll need to find some homes for them.