In the wake of the devastating 2019-20 bushfires that raged across so much of eastern Australia for weeks, I wrote a poem that raged against prime minister Scott Morrison’s total failure to show any kind of genuine leadership, or even common decency, empathy or humanity.

The poem was a piece of writing sparked by the words submitted in that week’s Word Expo – a word game I’ve been playing now for well over 10 years with writers from around the world, although these days limited to Australia and New Zealand. Writers submit a word, one that’s not been previously used, and from the disparate list invited to create a piece of writing. It can be anything – poetry, anecdote, story, script – the only criteria is that at least three of the submitted words are included.

While I still hesitate to describe myself as a poet, poetry is often what emerges from this weekly list of words. And most of the poems are political, often relating to a situation that’s been dominating the media in some capacity. It’s quite cathartic to vent one’s anger, frustration or despair at whatever is occurring that week in the state, the country or the world.

In January 2020 it was Australia’s bushfires, and the breathtakingly unbelievable discovery our PM had deemed it OK to quietly creep off to Hawaii with his family while half the country was engulfed in flames. His reasoning for abandoning communities whose homes had been destroyed, and landscapes, forests, animals scorched and decimated, and exhausted firefighters and volunteers, was because he ‘doesn’t hold a hose, mate’.

My poem was in the form of a letter and entitled Dear Mr Morrison. Once written it joined others in a bulging portfolio I keep in the filing cabinet, and that might occasionally be rolled out for a reading at the monthly Poetry Pedlars evening. But after spotting a call out for contributions for an anthology – planned as a fundraiser to support sanctuaries overwhelmed with wildlife victims from the fires – I offered this one, since it fitted the climate change/bushfire theme essential to submission requirements.

My poem was accepted, and the anthology was duly published in 2020. It includes impressive and moving comments and personal accounts and hopefully raised significant dollars to aid the rescue and recovery of the millions of animals and birds injured and displaced as a result of those terrible and disastrous fires. While I was not unnaturally pleased to see it in print, it never occurred to me that publication in this modest tome might prompt additional interest. 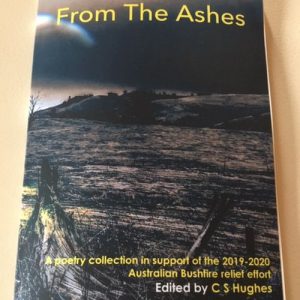 So an email seeking permission to use an extract from Dear Mr Morrison, from Australian academic Eve Darian-Smith who is based in the US, and was writing a book on the global response to climate change from a world where right-wing governments were on the rise, was completely unexpected. And she was terribly apologetic that she couldn’t offer me any payment, should I agree to her request.

To say I was gobsmacked is an understatement! Needless to say I agreed. Who wouldn’t at such an unlooked-for opportunity!

Publication was scheduled to be in early 2022, and I was promised a copy of the book. Late last week it arrived, and sure enough that extract is included (on pages 57 and 58 actually).

Sometimes you never know how, or with who, the words we write will resonate and find their own life in the world. It’s highly likely the idea for the poem was born on a Thursday, so it could be argued this particular ‘child’ was always likely to have ‘far to go’!

Under the cloak of Covid there are real fears the Morrison government is operating far too secretly, and attempting to push through legislation that has not been through proper processes, or been subjected to the scrutiny it would normally face. With attention focused elsewhere as people worry about their job, or lack thereof, of simply trying to keep their heads above water, financially speaking, it’s no wonder people are not paying close attention to some of the Coalition’s suspected slippery deals. It’s also no wonder that people are becoming increasingly suspicious. Myself included which prompted me to pen this piece earlier today.

so you go to the football
stand close, clap and cheer
but say parliament can’t sit
‘cos you’d all be too near

so why should we trust
what you say, or believe
you deserve one more chance
when you lie and deceive