Mornings at this time of year are dominated by harvesting fruit. From mid-December it was boysenberries – and we have the most abundant crop ever of these wonderful juicy and slightly tart long black berries. They’re still going a month on, although have slowed, thank goodness. There are only so many one can eat after all – for breakfast lunch and dinner at the moment – and the freezer is well stocked already. Friends and neighbours have also benefitted. As have the birds. The decision was made not to net the boysenberries this year. Too hard. I was sceptical but in fact this year’s crop has been so huge the few berries the birds have taken has almost been a relief!

As well as boysenberries though there are now raspberries to pick. These vines are covered and it is rather a jungle in there despite our best efforts to keep them under control. The nets keep the birds out, but not the bees, other insects, or tiny tree frogs. The latter are attracted by the shady cool environment, and a regular supply of moisture. So there are small risks and to avoid them I need to navigate some fragile barriers as I make my way down the row. Three delicate, finely spun and ecliptic structures greet me every day. They’re a silent, sticky and visible klaxon strung across the path, their owner stretched out and waiting in the middle, shimmering in the dappled sunlight, a warning to the unwary. But I know they’re there so I’m prepared. I flicked a morsel to one of them once, by way of an apology for the daily destruction I cause to their handiwork. Or should that be legwork? I was stunned at the speed that tiny creature was wrapped, bound and suspended. Talk about deadly efficiency. 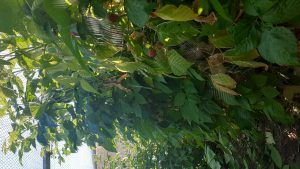 By now the iridescent proprietors of these deadly traps must know I’m coming. Perhaps they sigh with irritation at the knowledge they will have running repairs to do again when I’ve gone. I like to think they realise I’ve had the decency to disturb them as little as possible, by trying not to wreck the whole web. I can only admire their patience and resilience since they’ve yet to give up in disgust and abandon this real estate. It must be lucrative, because tomorrow those three webs will almost certainly be strung across the narrow walkway separating the two rows of raspberry canes.

At least not when the temperatures are as warm as they’ve been this summer, and there’s a lot of harvesting to be done. I’m rather over getting up at 5.30 every morning to walk Della dog, and then start the picking.

Breakfast has become a hasty meal for the duration, fitted in somewhere along the line before it gets too hot.

We had an abundance of boysenberries this year – which is excellent as I love them but they are a pain to pick. Literally. The raspberries are chugging along quite steadily and will continue to do so for at least another four months due to the different varieties we have growing, one of which is an autumn produce. All very yummy and delicious but picking them is also a pain so for these two berry varieties long sleeves are essential and in the weather we’ve been enjoying this is not comfortable. Hence starting as early as possible.

Despite removing some of the thornless blackberry vines last year we still have one, and of course there are plenty of berries on it which are just ripening nicely. At least I can strip off to short-sleeves when picking them.
And the plums have started as well so it’s all on to beat the birds although we did cover the greengage tree after the parrots decided to breakfast on these plums a few days ago. This is the first year we’ve had fruit, and they are prolific – as are the plums that pollinate the greengage – the Prune D’Argan which according to the book we have is the oldest known plum tree in the world.

Last but not least are the tomatoes, which are a bit late getting underway but have now started, and there are loads, so the kitchen bench is currently full of bowls of assorted produce that I shall have to work up enthusiasm to do something with.

So where is John in all of this? Well, he’s not been slouching around. All the watering is down to him – which includes all those native trees and bushes he’s been nurturing so carefully, which he’s grown from seed or cuttings, as well as the rest of the garden. For some it’s a hand watering job with buckets of water.

So as I swelter over picking produce I keep reminding myself I will appreciate all this bounty in the winter months when I go to the freezer(s) and from the selection that’s there, pick out a container of some of this home-grown produce to make those winter-warming casseroles and crumbles.

Summer time, and the living is easy, or so the song would have us believe. Personally I’m not so sure. At the moment my life involves getting up at the crack of dawn, taking Della dog for a walk, eating a quick breakfast, and then it’s on with the sunscreen and outside to pick produce. Before the unusually hot weather we’re having this year makes it too uncomfortable to stay outside for long. Then of course there’s always the odd weed to pull out, and dead-heading to do.

We’ve already waved farewell to the boysenberries for another year so currently the produce involves cultivated blackberries – which at least are thornless but are nowhere near as good as the wild variety, their toxic weed status in this country notwithstanding. Then it’s onto the raspberries. Too few of these as yet because the vines are still new but things are looking good for a decent autumn crop. The strawberries have had their spell of R&R and are getting underway again, and then there are capsicum, cucumbers – and those dilatory tomatoes, which are finally starting to ripen, albeit far later than we would normally expect. A straw poll suggests we are far from being alone in experiencing this tomato delay, which is some consolation, so perhaps the very late cold snap we had in November – when we thought we’d lost a couple of plants to frost – is what has set them back.

When the toms do finally get their act together harvesting will be time-consuming. There are loads, and several varieties. Which is wonderful, and I’m certainly not complaining, but it will mean more time out of the day to cook them up with onions, garlic, capsicum and whatever else in the fridge that needs a home, to freeze down for winter casseroles and pasta dishes. Maybe I’ll even dust off the dehydrator again and dry some, or try my hand at relish which did work rather well last year even if it was runnier than it should be.

But all this activity means my mornings are all but over, and barely a word is written, so all that easy summer living? Hmmmm, maybe not. Not this year at least.