Green and gold frogs that is, and who continue to call the sunken bath tub beside the little garden potting shed, home.

Actually our whole back garden seems to be something of a frog nursery, and although the green and golds rule, we’ve also spotted tiny tree frogs amongst the raspberries and grape vine, and for a few days at least one banjo frog was bunking down with his green and gold cousins.

Unless there are way more frogs on the property than are living in the bath tub though, some of the green and golds are getting adventurous and ranging further afield. On more than one occasion I’ve surprised them while picking strawberries or raspberries, while in the last couple of days we’ve noticed one who clearly prefers his own company. He or she has taken up residence in a regularly-watered plant pot by the back door.

Given the record-breaking temperatures that have characterised January this year, and with more hot weather forecast, frogs must be having a hard time keeping cool. The long dry spell means several smaller dams are also probably drying up, so reliable waterholes like our bath tub must represent premium real estate for frogs. They aren’t stupid. They know the garden areas that are watered regularly, and which plants are the best ones to seek shelter so it’s no surprise the bath tub has become a cool and welcome sanctuary.  And now we know it has so many amphibian residents we naturally make sure it’s topped up every day.

With so much of Tasmania currently on fire, and so many of our wildlife displaced and suffering as a result, it’s lovely to think our garden is an oasis for at least one species, and a few individuals who’ve chosen to stick around longer than we remember them ever doing before.  While some still dive into the tub when we walk past, others have become increasingly unconcerned by our presence and just continue to bask contentedly in the sunshine.

Now we have two (at least) green and gold frogs in the sunken bath tub. Although both are a similar size neither is the bright green of a mature frog, so we’re assuming they’ve still a bit of growing up to do. One of them especially was quite timid to begin with when it saw us approaching, hopping off the rim into the safety of the water, but they both now seem to have realised we pose no threat, and are content to sit and bask while watching us, the chooks, the garden, and Della the dog until the heat becomes too much for them.

A bit of research has also shown the bath tub could well be a nursery to more green and golds than just these two since it’s a species that takes longer than some to develop from tadpole to frog. Green and golds can stick around the bottom of ponds, dams – or our bath tub – for around 12 months while they slowly mature, so we could well have a few more lurking at the bottom and not quite ready to face the world.

Time will tell, but hoping these two will decide to stick around while they grow into the bright green of a fully mature frog, and maybe pass the time of day on a pumpkin or two, like these two in the photograph.

We’ve always had frogs on the property, both where we are now, and at our previous place a few kilometres away. Initially though we didn’t realise the large green frogs that we regularly spotted basking in the spring and summer sunshine were becoming increasingly rare. The first inkling these frogs weren’t commonly seen was when our vet – who had something of a thing about reptiles and amphibians – showed great excitement when we casually mentioned this bizarre (to us) sunbathing habit during the course of our then-dog’s annual health check.

Paul’s eyes lit up and he immediately asked if he could come down and frog hunt on our property one weekend.  Naturally we agreed, rather intrigued that he thought we were home to a creature clearly rather special.

While we learned from Paul that green and gold frogs (Litoris raniformis) were quite rare, it was several years later, and during the pulp mill campaign, that I learned the species was listed nationally as ‘vulnerable’ due to rapidly declining numbers. The cause was a likely combination of habitat loss, and the fatal chytrid fungus disease that has decimated frog populations globally. It seems our East Tamar community is home to a reasonably large and healthy population of green and golds – a status that proved of significant environmental importance in stopping the pulp mill. As one of several listed wildlife species whose habitat would be destroyed or disturbed by the pulp mill, pressure to up the ante to ensure the frogs’ protection provided another environmental complication for Gunns Limited during the long years of the fight to stop it. 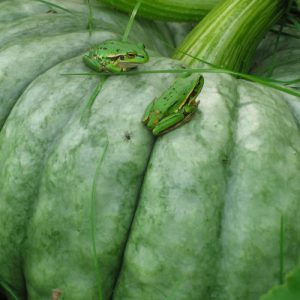 Over the years I’ve learned a lot more about green and golds, one of three frog species found in this area. Their growling call can be heard throughout spring and summer and although like all frogs they need to be near water, it was exciting to learn we had a long-term resident last year who decided to make its home in an old bath tub filled with rain water that is adjacent to the small potting shed.

We’d inherited this trough when we bought the house, and as it’s partially covered with a wide-spaced wire mesh then possibly several generations of green and golds have called it home over the years. Last year’s tenant hopped off at some point during autumn, but a week or so back we noticed a new one has moved in.

Hopefully he – or she – will decided to hang around for a while. 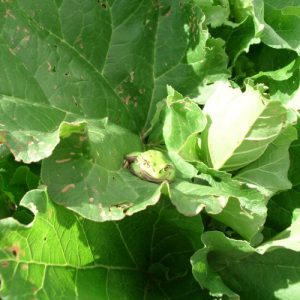