My involvement in the community-led campaign opposing failed timber company Gunns Limited’s pulp mill, planned for Tasmania’s Tamar Valley, was the reason for establishing this website, and blog, in the first place. In addition to hopefully attracting some more writing work, (hello, any editors out there reading this!) my aim was to prepare the ground for a book about the pulp mill campaign. Writing the book has proved slow going though, not least because this being Tasmania, there’s always a need to campaign about some inappropriate and controversial development somebody wants to build. And now the activism gene has been activated there’s no shortage of environmental and social justice issues and campaigns to be fired up about. By default I also seem to have become the go to person when it comes to being involved in Tasmanian actions, or at least helping to spread the word.

As previously mentioned there are already controversial proposals to have cable cars up Mt Wellington/kunyani, mining and logging threatening the Tarkine/takayna, and an east coast threatened by the massive Dolphin Sands resort, as well as an expansion of the salmon farming industry.

These projects do make me wonder about the intelligence of those in all levels of government. Too many appear unable to recognise the priceless value of Tasmania’s natural environment, and that its attraction to the thousands who come here to visit, is precisely because it’s relatively unspoiled and undeveloped, and wild. The opportunity to experience nature in the raw is what draws people here. Tasmania’s point of difference is the wilderness, history, boutique food and craft industries, a vibrant and growing arts culture, and an enviable sense of community in towns and cities free of skyscrapers, and where people can breathe freely, and aren’t obliged to live or work 15 floors up.
It’s the ruggedness of the wilderness, the forests, and the unique wildlife that draw people to Tasmania’s shores. So it’s been both disappointing and frustrating to reflect that a good chunk of my year so far has been the need – yet again – to take up arms, (metaphorically speaking) on behalf of one of these special places.

This time it’s Launceston’s Cataract Gorge that is under siege. Two developers with very different agendas, but with equally inappropriate and intrusive projects want a piece of it. Both will threaten the peace, tranquillity and integrity of an iconic public space that is deeply valued and loved, not just by the locals but also by the thousands who visit it every year from all around the world. Few people are not blown away by the fact such an amazing and accessible place exists in the middle of a city. So it’s not at all surprising tourism publications and surveys consistently rate the Gorge as one of the top three must-see Tasmanian destinations.

No wonder then a significant number of people in the community are passionately opposed to the idea of 24 eight-seater gondolas circling the comparatively compact Gorge area 24/7. Given they will be fully enclosed and see-through glassed gondolas, whose design removes any possibility of privacy for people below walking, swimming or relaxing on the ground, it’s unsurprising there’s a mixture of concern and outrage such a development could be approved by the council.

Also of concern is the already-approved 39 metre Gorge Hotel, which will dominate Launceston’s skyline, and overshadow the Gorge from its controversial central location. One that is already challenged by increased traffic flow, and potential structural instability given the site’s proximity to the river.

Two campaigns that are arguably driven by greed and ambition on the part of developers, and with little consideration for the broader community who will be obliged to live with them. Neither seem to have any genuine appreciation and understanding of Tasmania’s unique place in a world where people can pause, catch their breath, and reconnect to a slower pace of life in a more natural world free from noise, crowds, and the tyranny of technology.
But while the writing pace on the book has slowed, it certainly hasn’t stopped. I’m just having to revise the timeline for finishing it. 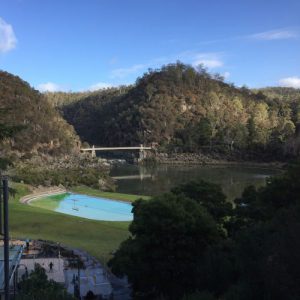 With September not far away theoretically we’re nearing the finishing line so far as winter goes, and from the look of them some of my houseplants are feeling the same way I do: hanging out for some warmth, sunshine and freedom from all the layers of clothing needed to stay warm. Not that we haven’t had any sunshine over the past three months, but there’s not always been much warmth to it, and it certainly hasn’t always filtered through to every room in the house for very long. It’s the perennial problem with houseplants in colder weather, moving them around so they aren’t too stressed by the changes in temperature. There’s only so many that can be housed in the rooms kept heated throughout winter; the others all just have to cope and as we near winter’s finishing line some are not coping too well.

My spectacular Asplenium bulbiferum or hen and chicken fern – and my pride and joy – is quite happy, ferns being quite comfortable in cooler temperatures, and the ‘chicks’ I’ve successfully propagated from the ‘hen’ are also doing very nicely thank you. All are going to need re-potting in a few weeks, and the ‘hen’ is also going to need a larger plant pot holder. Again.

I can’t quite remember how I came by this plant – which I’ve had for years – but I do remember it becoming extremely sick and on the point of death some time ago, losing all its fronds one by one. Nothing I did seemed to restore it to health. Stubbornly I refused to admit it was dying, and my faith was eventually rewarded when a new frond or two finally peeped out. From that moment on it has never looked back, and is now seriously impressive, to the point I’m not actually quite sure where it’s going to live, having all but outgrown its position in the bedroom on the dressing table. Interestingly one of its ‘chicks’ is in a similar state of ill-health, and I’m in two minds about whether or not to persevere, or for how long. Maybe I’ll give it a few more weeks yet before declaring defeat.

Other than the ‘nodding violets’ or streptocarpella saxorum to give it its botanical name, my other plants tend to all be refugees, either from life in the florist shop (and since we sold the shop around 25 years ago this makes them all pretty good survivors), or my years in a school library. Again, while this makes the piece I found broken off and which I brought home to try and rescue, makes it not so long in the tooth, it has grown rather rapidly to the point of being another challenge to re-position when it next needs re-potting. 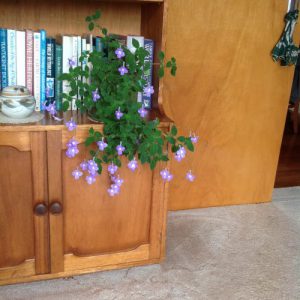 The nodding violets all grew from a cutting given to me by Betsy, a friend and fellow writer I met when we both were in the same women writers group. She broke off a piece from her prolifically flowering plant one day saying it was easy to establish from a cutting. And it was, so now I have several of them – but all are looking like they’ll be happy to see the back of the cold weather.